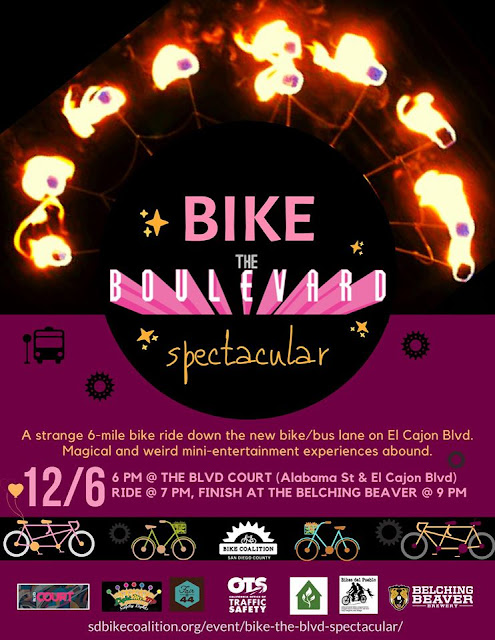 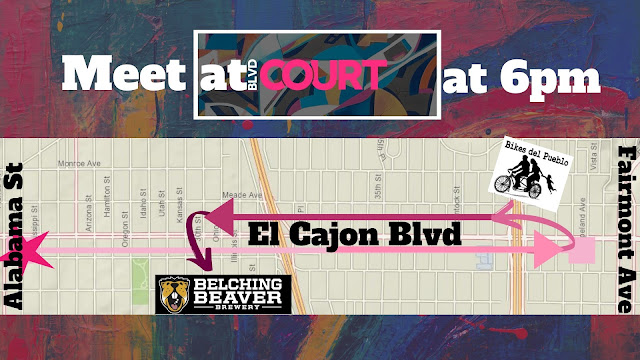 WHY:
The new bus and bike lane on El Cajon Blvd. offers cyclists a safe path for commuting by bike. This event which coincides with the new BLVD Court’s First Friday pop-up gathering, invites the community to explore this new lane for alternative transportation while meeting other neighbors from the Uptown area.

San Diego Bike Coalition is a nonprofit organization that advocates for and protects the rights of all people who ride bicycles. They promote bicycling as a mainstream, safe and enjoyable form of transportation and recreation. For more information, please visit www.sdbikecoalition.org.
Posted by Rosemary Bystrak at 11:17 PM 7 comments

WHAT:
Last night, the City of San Diego's Mobility Board discussed the 30th Street resurfacing project, specifically addressing the current options presented for protected bikeways. After an eight to two vote, the Mobility Board motioned in favor of option A+, Mayor Kevin Faulconer’s recommendation for a compromise plan which preserves additional parking and upholds a high-class bikeway network.

“With the option A+ recommendation for the 30th Street resurfacing project, we have the opportunity to offer the best bikeway that will encourage more ridership and help the City achieve its Climate Action Plan goals. It’s important that we support protected bikeways especially in urban business districts to create safe biking connections for community members. The Census Bureau reports that 43 of the 70 largest cities in the country have seen more people biking to work. Option A+ is good for businesses and good for the community.”

WHY
The 30th Street corridor is a highly transited road in North Park and Normal Heights that can present dangerous situations for bike commuters. The protected bikeways proposed for 30th Street will provide cyclists with safe pathways that connect their communities to other biking paths. This project will take car traffic and parking into consideration to minimize the impact on other forms of transportation.

In order to achieve the Climate Action Plan goals by 2020, a full network of protected and connected bikeways is essential throughout San Diego. Cities all across the U.S. are prioritizing bike-friendly streets with better infrastructure and ambitious plans and policies. Some of the cities with four percent or greater bike share commuting include San Francisco, Portland, Minneapolis, Washington DC and Minneapolis.

FACTS FROM OTHER BUSINESS DISTRICTS WITH BIKEWAYS

After adding protecting bike lanes, these cities saw a boost to local economies*:

San Diego Bike Coalition is a nonprofit organization that advocates for and protects the rights of all people who ride bicycles. They promote bicycling as a mainstream, safe and enjoyable form of transportation and recreation. For more information, please visit www.sdbikecoalition.org.